Our friend and neighbor Tim Miller has died. There will be a Memorial Service for him this Sunday,  22 January, at Conkling Hall, from 2-4 pm. Please keep him and his family in your prayers.

“Being called by name”

1:38 When Jesus turned and saw them following, he said to them, “What are you looking for?” They said to him, “Rabbi” (which translated means Teacher), “where are you staying?”

1:39 He said to them, “Come and see.” They came and saw where he was staying, and they remained with him that day. It was about four o’clock in the afternoon.

One of the two who heard John speak and followed him was Andrew, Simon Peter’s brother.

He first found his brother Simon and said to him, “We have found the Messiah” (which is translated Anointed).

He brought Simon to Jesus, who looked at him and said, “You are Simon son of John. You are to be called Cephas” (which is translated Peter).

What must it have felt like for Simon to have gone to see this Anointed, this Messiah, this Lamb of God, and for this Jesus to look at him and say, “I know you?” What a strange, intimate moment.   Only the day before John had testified

“I saw the Spirit descending from heaven like a dove, and it remained on him.

I myself did not know him, but the one who sent me to baptize with water said to me, ‘He on whom you see the Spirit descend and remain is the one who baptizes with the Holy Spirit.’

And I myself have seen and have testified that this is the Son of God.”

Imagine that you were Simon, your brother had just come to tell you that he had found the Messiah.  And you went post-haste to see him.  And this Messiah turned to you and said, “You are Simon.  I recognize you.  I know you so well, that I am going to give you a new name to signify who I really know you to be, a name with new possibilities!  A name to indicate a new direction!”

Names are important.  Knowing someone’s name and using it to greet them can enlarge our concept of “home”.  Like a verbal warm embrace, greeting someone by name is a gesture that says, “Welcome.  Join me.  Let us be together.  We are part of a community.”

I have always felt valued when someone knows my name.   Many years ago, I worked in a small town and frequented Lenny’s Pizzeria.  Lenny was known not only for his pizza, but also for his friendly, warm nature.  He would always greet me, “Miss Lin!  How are you today!”  Some may say that he was just a good business man practicing good business, but I like to think that he was truly happy to see me, that he cared about me and how I was doing.   Eating there was as comfortable to me as sitting in my own kitchen.  In fact, it was better, because I was surrounded by the warmth that Lenny created.

Today I have an auto mechanic, Lou, that smiles and greets me with a warm and familiar, “Hey Lin, how’re you doing?”  Lou was a huge help to me when I first moved to this area.  My car had died, in a snowstorm, in the dark, on Rt 32.  My cell phone had no service and I was stranded.  A kind man offered to let me use his phone and told me, “Tell them to bring the car to Lou.  He’s a good guy.  He’ll take care of you.”  And so I did.   And he did.   Now, thirteen years later, I still bring my car to Lou.  He has helped me through some drama and real trauma – the time I fell asleep and drove off the road, puncturing the radiator.  The time my car was hit by a trailer, I was dragged and my car was totaled.  So many miles, so many car stories!   I would always take my dog, Winston, with me when I had my car serviced.  Lou knew his name, too, and would always make a fuss over him.   What a gift to be received in this way!  To be welcomed warmly and to know that I would be cared for!

There is also something about the way these two people called me “Lin” as opposed to “Linda” that made me feel at home.   Only my family and close friends called me Lin, so by using that name, my familial nickname, unbeknownst to them, they joined my extended family of people who affectionately call me by that name

Unfortunately, some people are given names that do not affirm their worth.  A friend shared with me an article about a group of girls in India that took part in a ceremony to shed their unwanted names.  At birth, these girls had been given names that mean “unwanted” in Hindi.  The naming ceremony was one effort to fight gender discrimination against girls in a society where the birth of a girl promises to be a financial burden.   Families can go into debt to provide a huge dowry to marry off their daughters.  Sons, on the other hand, bring in money by marrying a girl with a large dowry.   Their community was attempting to fight a societal trend in which girl fetuses were being aborted, and baby girls died from lack of attention.  This community provided a way for the girls to value themselves, be valued and provide a hopeful future in which the mere statement of their name would be life affirming.  In the ceremony, these 285 “unwanted” girls wearing their best outfits with barrettes, braids and bows in their hair — lined up to receive certificates with their new names along with small flower bouquets from Satara district officials in Maharashtra state.

“Now in school, my classmates and friends will be calling me this new name, and that makes me very happy,” said a 15-year-old girl who had been named Nakusa [unwanted] by a grandfather disappointed by her birth. She chose the new name “Ashmita,” which means “very tough” or “rock hard” in Hindi.

Unwanted children are not found only in India.  I once spoke to a man who ran a farm here in NY.  He and his wife, who was a social worker, decided to open their farm to visits from at-risk children, hoping that their interactions with the animals on the farm would provide a positive environment for them.  One day, as the farmer was working, he overheard a little girl, maybe 6 or 7, who was talking to a cow.   She didn’t think anyone else could hear her, and she said to the cow, “I don’t know my real name.  At home they just call me “whore” and I don’t even know what that word means.”

I don’t have words to comment on such tragedy.  I will just take a moment to let the significance of that sink in.

There are so many tragic stories in this life.  Fr. Mark and I went to a conference this past week entitled, “Joining Forces: Reducing and Responding to Sexual Assault Across Disciplines”.   The main speaker told her story of an assault that she suffered, brutally raped and beaten by four men.   She was found in the trunk of a car by an off-duty policeman who felt “a nudge” to go back out a drive around a bit.   When she heard his voice outside the trunk of the car, and heard him say his name, “My name is Officer Billings.  I am a police officer and I am going to get you out” she began to feel some hope.  Her story was a nightmare of a story.  Yet there she was, standing in front of us, wanting to share it to help us help others who have been assaulted.  I was so moved by her story.  I got chills when she told of her rescue and the saving power at the mention of his name.  The police officer was hailed as a hero.  He said, “I was just doing my job.  If you had seen what she went through, you would call her the hero.”

We are blessed to be called by name and to be known by Jesus.  This man, this Son of God, whom we call our Messiah, walked the earth validating people from all walks of life.  He validated men.  He validated women.  The sick, the lame, the desperate.  He gave them hope and healing by greeting them by name.

“A teacher is someone who calls you by your true name, and says

We call our teacher Jesus.  He knows us, values us and calls each of us by our true name.  He sends us forth. 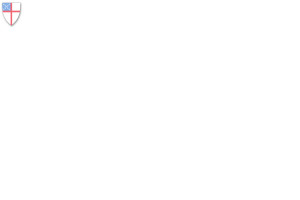 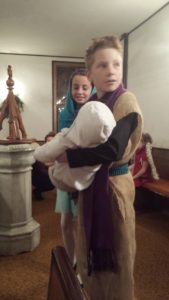 Joseph, Mary and the Babe getting ready to enter 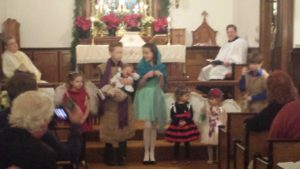 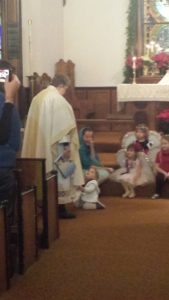 Mother Nancy Communing With the Babe 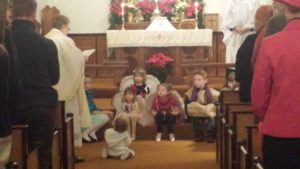 The church annual meeting will take place after the conclusion of the service on Sunday, January 15. Since service starts at 11:30, the meeting will likely begin about 12:45.

Our good friend Gretchen Coward has died. Please keep her and her family in your prayers.

Neighbor and friend Tim Miller has suffered a stroke. Our thoughts and prayers are with him as he recovers.

Thanks to all who organized and attended the wonderful Christmas Eve service, particularly the children of the pageant and Mother Nancy Betz. It was all warm, relaxed and uplifting.

Sunday service is at 11 AM unless otherwise noted in the Services Schedule. Our service is either Morning Prayer or Holy Eucharist. See SERVICES for our weekly schedule.